Troops out of Afghanistan Now! 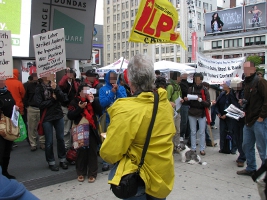 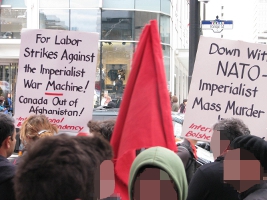 We are pleased to be here today participating in this united front demonstration to mark the 10th anniversary of the criminal occupation of Afghanistan. We fully support the demand that Canadian imperialism’s armed thugs should get “Out of Afghanistan Now!”

As Marxists we think that it is very important to link the issue of Imperialist wars like the attack on Afghanistan to a broader understanding of the necessity to struggle against the entire capitalist system. We see it as particularly important to develop this consciousness within the working class and among radicalizing youth. While revolutionaries are quite happy to protest against imperialist war alongside liberals, social-democrats and pacifists, we also have a duty to combat what Leon Trotsky (the founder of the Red Army) referred to as "the narcotic and debilitating illusions of pacifism." Vladimir Lenin, Trotsky’s partner in the Russian Revolution of 1917, asserted that in the long run the only way to end imperialist wars is through overthrowing capitalism:

Marxists are not pacifists. The kind of antiwar movement we want to build is one that tells people the truth—starting with the proposition that “Capitalism Can’t Be Fixed!” In neo-colonial wars like those waged on Libya, Iraq and Afghanistan socialists side with the oppressed people against the imperialist aggressors. We do so in Afghanistan despite being completely opposed to the reactionary misogynist, theocratic Taliban—a formation that, like Osama Bin Laden’s Al Qaeda, originated in the mujahadein the CIA trained in the 1980s to combat the pro-Soviet left-nationalist regime of the PDPA. While we are completely opposed to the Taliban politically, we support every military blow they strike against the NATO invaders.

NATO troops are not in Afghanistan to liberate women, build schools or combat “terrorism”—NATO itself is the world’s largest and most dangerous terrorist organization. The “mission” in Afghanistan, from the beginning, was to gain control of transit routes for the immense oil resources of the Caspian Basin. It is now clear that, from a strategic point of view, the imperialist war in Afghanistan has been lost. The Taliban have survived and imperialist forces are being pulled out bit by bit. We welcome this defeat.

This war was never very popular in Canada—despite all the attempts by the ruling class to infuse the population with patriotic militarist poison. But we must also see that the strategy pursued by the official peace movement in relation to the wars in Iraq and Afghanistan has failed almost as spectacularly as the military interventions themselves. A good part of the reason for this, in our view, is that they were exclusively organized around liberal, pro-capitalist pacifist politics in an attempt to gain mainstream “respectability.”

We favor a different approach— a class-struggle approach to antiwar work that links imperialist wars abroad with attacks on working people and the oppressed here at home. An outstanding example of this was the mass antiwar strike on Mayday 2008 by US dockers. On that day 25,000 members of the International Longshore and Warehouse Union shut down every port from San Diego to Seattle to protest the occupation of Iraq.

This important action (which was largely ignored by the corporate media of course) was initiated by Jack Heyman, a friend of ours and a long time class struggle militant on the waterfront. It was carried out in defiance of threats of legal action by the shipping bosses and government labor arbitrators. It was the first political strike ever conducted by American workers against an ongoing imperialist military intervention and stands as a model for future, larger and more militant actions—in the US, Canada and elsewhere.