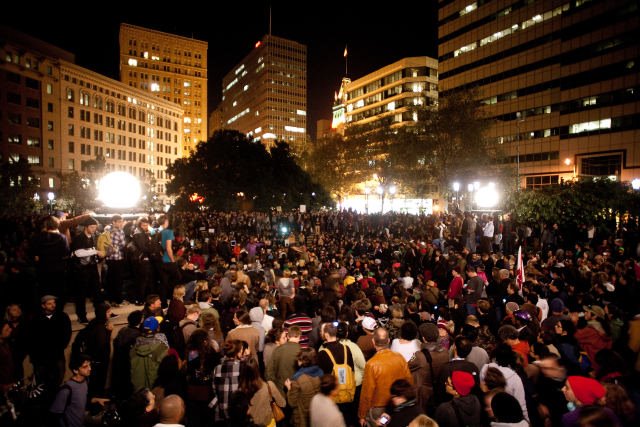 Whenever Iranian or Syrian police teargas and beat anti-regime protesters, the White House is quick to issue an outraged denunciation. Yet state repression has routinely been used by the American ruling class against any movement it considers a potentially serious political challenge (even those whose actions are limited to the supposed constitutional rights to “free speech” and “free assembly”). The violent response to the movement spawned by Occupy Wall Street (OWS) is the most recent example.

On 24 September, barely a week after OWS began, New York cops attacked marchers on their way to Union Square, arresting more than 80. A week later, on 1 October, 700 protesters were arrested on the Brooklyn Bridge. On 12 October, New York Mayor Michael Bloomberg announced that the OWS camp at Zuccotti Park would be removed. But the outpouring of solidarity was so great that the Bloomberg administration had to back off—at least temporarily.

It would be unrealistic to imagine that each instance of premeditated police violence (or the threat of same) will indefinitely continue to generate ever greater support for the movement against corporate tyranny. Police attacks on Occupy protesters in Chicago, Atlanta, Boston, Denver and other cities have reportedly been somewhat more successful. Yet it has clearly come as an unpleasant surprise for America’s rulers that a large swath of the population has disregarded the mainstream media’s depiction of the Occupy movement as a mix of youthful naifs and unkempt, socially-marginal malcontents.

On Friday 28 October, Mitt Romney, campaigning for the Republican presidential nomination in traditionally conservative New Hampshire, found it expedient to join President Obama in claiming to “sympathize” with key concerns of the OWS protesters. Their sympathy is evidence of the fact that, at least so far, the combination of police repression and bourgeois propaganda has failed to make a dent in a movement that was initially written off as juvenile theatrics. Popular support for the occupiers has risen in lockstep with public awareness of their message—the complaint that in what purports to be the land of the free, the “1%” at the top lord it over the other “99%.” While oversimplified, it is nonetheless a potent idea and open to a spectrum of interpretations. One protester, who was on the right track, carried a sign that read: “When the rich steal from the poor it’s called business. When the poor fight back it’s called violence.”

Oakland Mayor Jean Quan, who gave the order for an assault on the Occupy encampment in her city on 25 October, did not anticipate the public’s revulsion at the scenes of police brutality and violence that quickly circulated on the internet. Anger has focused on a potentially life-threatening injury suffered by Scott Olsen, a 24-year-old former U.S. Marine and member of Iraq Veterans Against the War, whose head was split open by a teargas canister.

A few weeks prior to ordering the attack, Quan, a “left” Democrat who once identified with the defunct Maoist Communist Workers Party, had been proclaiming her support for the “Occupy” movement. Her first response to the widespread popular outrage at the police assault was to deny personal responsibility. When that did not fly, she “apologized” for the attack and met with Olsen’s parents to express her “concern” for his condition. When Quan attempted to speak at a rally of Occupy supporters on Thursday 27 October, she was booed off the stage.

Resisting the Violence of the Ruling Class

Rather than cowing the militants, the attack on the Oakland encampment appears to have outraged them. A meeting of a couple of thousand protesters the next night voted overwhelmingly in favor of attempting to launch a one-day general strike on Wednesday 2 November. (The Oakland General Assembly operates on the basis of a “modified” consensus model where any proposal with 90 percent support is adopted.)

The Bay Area has long been a stronghold of the left and workers’ movement in America and the last general strike that ever took place in the U.S. occurred in Oakland in 1946. The series of port shutdowns carried out in recent years by the International Longshore and Warehouse Union (ILWU) in defense of Mumia Abu-Jamal, in opposition to the Iraq war, and in protest of the racist police murder of Oscar Grant has doubtless helped the activists of Occupy Oakland understand the potential political and social power of the labor movement.

There has been some union support for the proposed mass strike—ILWU Local 10 is backing a blockade of the Port of Oakland on the evening of 2 November, and the Oakland Education Association (teachers) and Alameda County Carpenters Local 713 have endorsed the protest and called on their members to support the action. Yet it does not appear that these unions are actually prepared to officially strike on 2 November. The labor bureaucrats representing city workers have negotiated a deal with management to allow their members to use leave-time in order to participate in the protests, but this makes it a matter of individual choice rather than collective action.

Capitalism Can’t Be Fixed—Expropriate the ‘1%’!

It is unfortunate that this general strike initiative, which could link the demands of organized and unorganized workers, is constrained by the timidity of a union leadership that shudders at the idea of breaking the “no-strike” clauses in the contracts they negotiated with the bosses. But even with these limitations, this call represents an important step forward for the Occupy movement. It not only gives political expression to the intense opposition to the brutal suppression of the right to protest and free assembly, but also points in the direction of the future labor-centered mass actions necessary to challenge and ultimately uproot the domination of the “1%,” i.e., the capitalist ruling class. Capitalism can’t be fixed—it is a social system based on exploitation and no combination of Robin Hood tax, jobs bill, tightened financial regulations or any other reform can change that. To solve the fundamental problems the Occupy movement is attempting to address, it is necessary to construct a revolutionary party capable of leading the working class and oppressed in expropriating the “1%” and reconstructing society on an egalitarian, socialist basis with full employment and universal access to free post-secondary education, decent housing and quality healthcare—a social order in which economic activity is geared to meeting the needs of the many, rather than the enrichment of a few.

Break With the Democrats—Build a Revolutionary Workers’ Party!

Expropriate the Banks & Corporations with No Compensation!

Capitalism Can’t Be Fixed—Forward to a Workers’ Government!

Defend Occupy Oakland with the Muscle of Organized Labor

Demonstrators in downtown Oakland protesting the bank-driven economic crisis were brutally attacked by police from 18 Bay Area agencies on Tuesday Oct. 25. Mayor Quan, who was supported by ILWU Local 10 in the recent elections, ordered this bloody assault. Cops used potentially lethal weapons to break up the occupation of Frank Ogawa (now renamed Oscar Grant) Plaza just as they did in the port against anti-war protesters in 2003. That police attack was even criticized by the UN Human Rights Commission and ended up costing Oakland over $2 million in civil suits.

Then-Local 10 longshoreman Billy Kepo’o was hit in the hand by a police tear gas canister causing a bloody mess. Now, Iraqi war vet, Scott Olsen, was hit in the head with a police projectile, causing a fracture and putting him in critical condition in Highland Hospital. This is exactly what killed one of the strikers in Seattle in the Big Strike of 1934. That history of police violence against strikers is why our Local 10 Constitution bans cops from membership in our union.

ILWU is under attack from PMA employers, not just here in the port of Oakland but especially in Longview, Washington. Our jobs and the survival of the ILWU as a fighting union are at stake. We heard the report of our Longview Local 21 brothers at our union meeting last week and we pledged our solidarity, just as we did for other unions under attack, whether in Charleston, South Carolina or Madison, Wisconsin.

At the same time there is an outrage at the bankers and the capitalist crisis which has caused massive hardship on the working class. Occupy Oakland protesters have called for a General Strike on November 2. Whether this actually means real strike action by workers depends in large part on union participation. Local 10 has always been in the lead in the labor movement and all eyes are on us. As a first step, in defending our union and others against economic and political repression, we need to mobilize our members to participate in the rally and occupation November 2 in Oscar Grant Plaza. Shut it down!

On Wednesday, November 2nd as part of the Oakland General Strike, we will march on the Port of Oakland and shut it down. We will converge at 5pm at 14th and Broadway and march to the port to shut it down before the 7pm night shift.

We are doing this in order to blockade the flow of capital on the day of the General Strike, as well as to show our commitment to solidarity with Longshore workers in their struggle against EGT in Longview, Washington. EGT is an international grain exporter which is attempting to rupture longshore jurisdiction. The driving force behind EGT is Bunge LTD, a leading agribusiness and food company which reported 2.4 billion dollars in profit in 2010; this company has strong ties to Wall Street. This is but one example of Wall Street’s corporate attack on workers.

The Oakland General Strike will demonstrate the wide reaching implications of the Occupy Wall Street movement. The entire world is fed up with the huge disparity of wealth caused by the present system. Now is the time that the people are doing something about it.The Oakland General Strike is a warning shot to the 1% — their wealth only exists because the 99% creates it for them.

In a unanimous vote on 10/28/11, the OEA Executive Board endorsed Occupy Oakland's November 2 "General Strike/Mass Day of Action" and is urging members to participate in a variety of ways, including taking personal leave to join actions at Frank Ogawa Plaza, doing informational picketing at school sites, and holding teach-ins on the history of general strikes and organizing for economic justice.

Faced with growing class sizes and dwindling resources, school closures, and the ongoing attempts of charter management companies to entice Oakland schools to convert to charters, it is critical that we link our struggles with those of the 99% of Americans fighting for social and economic justice. It is simply wrong that banks and corporations are bailed out and continue to reap huge profits, while schools and social services suffer.

Join us on November 2nd, in solidarity with Occupy Movements across the globe!

Local 713 of the United Brotherhood of Carpenters stands in solidarity with the Occupy Wall Street movement. We support the right of all working people to organize and peacefully assemble to demand their rights.

We further agree that the 1% should not continue to go untaxed while the 99% face layoffs, pay and benefit cuts, foreclosures and the closing of our children's schools and our public services.

We further strongly condemn the police brutality used against the Occupy Oakland movement and the devastating injury inflicted on Iraq veteran Scott Olsen.

We further resolve to support the call of the 2,000 Oaklanders at Occupy Oakland for a one-day strike in Oakland for Wednesday November 2nd, 2011, to protest our country's rising inequality and the brutal actions of the police in the city of Oakland, California.

To be sent to Mayor Jean Quan and the Oakland Police Department.