The Right to Live and Die 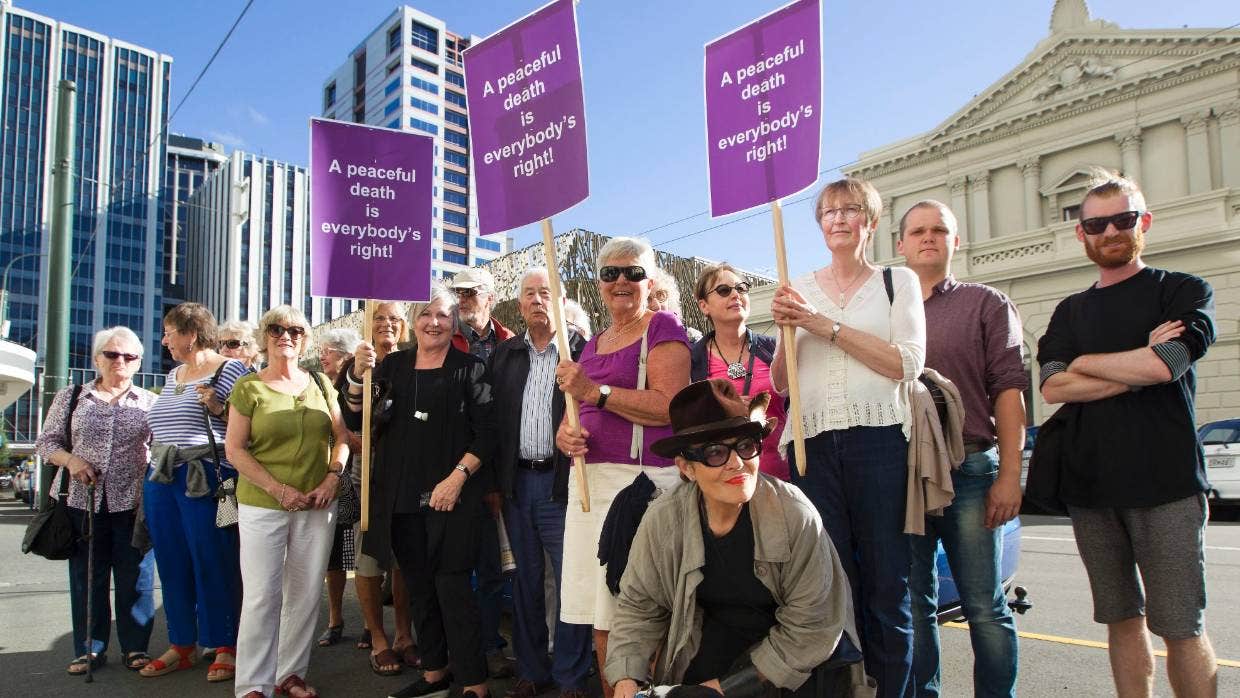 The International Socialist Organisation Aotearoa (ISO) has been unable to take a position on a referendum on decriminalisation of euthanasia, running alongside the New Zealand general election on 17 October. A signed article calling for opposition to euthanasia reform was published on the ISO website in August, but it was left to non-ISO member John Ashbourne to provide this Marxist position of critical support to limited reforms on the right to die, first published on iso.org.nz.

It was with great concern that I read the views expressed in the ISO's 18 August article on the upcoming euthanasia referendum (“Thoughts on the End of Life Choice Act Referendum”, by Dougal McNeill and Serah Allison). While this article professes not to be the official line of the ISO, and there is clearly some division within the organisation preventing it from taking a clear position, it should be noted that the article's position – that revolutionary socialists should oppose partial steps towards a person's right to die of their own free choice – is the only view so far published by the ISO.

When a socialist organisation puts forth an argument on euthanasia that takes the same side as the Catholic Church and the right-wing think tank Discovery Institute, worker-activists might feel uneasy. They should. Revolutionary Marxism begins by fighting for what we need here and now. In doing so, we expose the inability of capitalism to provide even adequate rights to workers while also helping to strengthen the forces necessary to overthrow capitalism and establish a society that can secure these basic human rights.

My Body, but Not my Choice?

Euthanasia and disability rights are not in conflict. There is little good Marxist argument for restricting bodily autonomy. Under capitalism, the worker is a commodity; our life and all of our choices, from what we do with our body to how our mind is shaped, are endlessly controlled for the purpose of maximising our potential to be exploited for profit. Marxists want all people to be free of commodification and control, to have autonomy over our bodies, minds and lives. Implicit in that is the right to choose to die.

Capitalism is an exploitative and coercive system, and all choices workers make under capitalism are made with a gun to our heads – work or starve, pay rent or be homeless, take on student loans or be trapped in poverty. This compulsion is not merely external but psychological. Our minds and personalities are warped by advertising and social media; we are trapped in economic dependence on bosses, relatives, caregivers, or the state; we face constant, psyche-deforming pressure to define our worth by our productivity. In the face of this, it's difficult to say that any of our choices are entirely our own.

This doesn't mean we should advocate stripping autonomy away from people until such time as their choices are free of compulsion. The same logic could, for instance, be applied to the right to an abortion. A pregnant person might face pressure to get an abortion due to the high costs of raising a child in capitalist society and the inadequate resources available to new parents, or because of lack of support from their partner or family, particularly if tests indicate that the baby will be disabled. Conversely, they may face intense social, cultural or religious pressure against abortion. In either case, this may push them into making decisions that go against their own desires. I presume that Dougal and Serah would not argue that this justifies a lack of support for the fundamental right to an abortion?

It is significant that they quote Wendi Wicks, a long-time disability rights campaigner with the Disabled Persons Association, who has argued against prenatal screening for Down's Syndrome on the grounds that it will lead to foetuses with the genetic disorder being more likely to be aborted. In other words, foetuses with disabilities must be protected from their parents.

Socialists must place the fight for a world that treats those with physical and cognitive challenges with humanity and accommodates for their disabilities among our foremost demands. But we oppose any restrictions on abortion that would compel anyone to give birth to a child against their wishes and defend everyone's right to control their own body. We must reject Wicks' argument against euthanasia on the same grounds. We can and must struggle for a society that treats all people, regardless of their disabilities (or any other factor), with the respect and humanity they deserve and for workers' rights to die on their own terms.

The Mathematics of Reformism

Dougal and Serah, however, treat the two struggles as separate and opposing and choose the fight for disability rights over the fight for the right to die, postponing the latter until we have a world free of compulsion and prejudice. This calculation, at its heart, is reformist, deliberately restricted to what is achievable under capitalism. Revolutionaries fight for rights unrestricted by capitalism's constraints – and clearly link the full realisation of those rights to the necessity of overthrowing capitalism.

The article's conclusion is also deeply patronising: it assumes that those who endure terrible suffering and wish for euthanasia, including the disabled, are incapable of making their own decisions and need to be protected for their own good by the bourgeois legal system.

There are obvious problems with socialists relying on bourgeois law, but one often-overlooked problem is that it never applies fully to the bourgeoisie. Many things forbidden to the working class are (tacitly or overtly) permitted for the ruling class – euthanasia, judging by overseas evidence, is no exception. Writing in 2014, during Australia's still-ongoing struggle for euthanasia rights, Chris Fotinopoulos noted that Australian law “allows, albeit through police inaction, some Australians to maintain control over their suffering and death while denying the same level of control to others … control over suffering and death seems to be with the few who have the necessary resources, networks, and medical and pharmacological means.” Many wealthy Australians openly admitted having access to Nembutal or other euthanasia methods, and Fotinopoulos also notes that “For the price of an airline ticket to Europe and a fee of 4,000 euro, [Australians] can book a room at the Zurich-based Dignitas euthanasia clinic where they are free to die in peace and without state intervention” (abc.net.au, 8 July 2014).

The notion that the wealthy might simply buy their way past legal barriers should not startle a Marxist reader. Anatole France observed in 1894 that “the law, in its majestic equality, forbids rich and poor alike to sleep under bridges, beg in the streets, and steal loaves of bread”. We might likewise say in 2020 that the law permits rich and poor alike to fly to Zurich and book an appointment with Dignitas. In present-day capitalist society, even under conditions of formal illegality, there is very little stopping the capitalist class from choosing to end their own lives via medical procedure. It is the working class who have to forego dying on our own terms – or else attempt riskier and more painful methods of suicide.

This is further borne out in countries where euthanasia is legal. Dougal and Serah, while rightly calling out the general failure of the New Zealand healthcare system for M¬aori and Pasifika, express concern that legalising euthanasia will push members of oppressed groups into terminating their own lives. But evidence suggests the opposite. In Oregon, for instance, where euthanasia is legal, the typical patient is whiter, better-educated, and more likely to be male than the general population. Far from facing more pressure to die against their will, minorities will likely be under-serviced by a legal euthanasia programme.

Under capitalism, minorities and the poor must overcome many economic barriers and systemic gatekeeping to access medical care – especially elective procedures like euthanasia. As socialists, we must struggle for euthanasia that is not just legal, but free and on demand.

For the Right to Die with Dignity!

I would be the first to say the End of Life Choice Bill is inadequate. We should expect no less from something cooked up by ACT leader David Seymour and passed through the prism of a compromiser government. But the ISO article does not adequately capture its flaws.

The bill's scope is altogether too narrow, requiring an expectation that life will end in six months. This denies the option of euthanasia to those who can expect to live a long time in conditions of terrible suffering. It also requires the approval of two doctors, rather than being entirely the choice of the individual concerned. The cannabis decriminalisation referendum, which will occur at the same time, is also deeply deficient, as was the recent decriminalisation of abortion. However, both proposals are worthy of support by the working class as they materially advance our access to healthcare and freedom to make choices about our lives and bodies. Under capitalism, such reforms will always face limitations and restrictions. But faced with the narrow choice posed by this bourgeois referendum, revolutionaries support the option that will extend human rights, while continuing to oppose the limitations of bourgeois legislation.

At the same time, we should make it plain that the deficiencies of these reforms are the result of compromises deliberately made to uphold aspects of the capitalist order at the expense of the oppressed. In pointing out that reforms will always be limited (and reversible) under capitalism, but fighting for them regardless, we can advance the process of building a revolutionary party to fight for the overthrow of capitalism.

It is only under socialism that we will realise the full right to die with dignity – but this is equally true of the right to live with dignity. Regardless of the outcome of the referendum (or the election), the need for the revolutionary overthrow of capitalism will remain just as acute as before, and our chief task remains building the forces of this revolution. But we should at least have the courage to argue here and now for the rights of all to live (and die) a little freer from bourgeois law and morality policing. On this basis – and without giving any support to the current government or its successor – I call on comrades in the ISO and other socialists to cast a “yes” vote in the upcoming referendum on euthanasia.

Related article:
Jacinda Ardern – no Friend to Workers and Oppressed: No to Labour, Yes to Euthanasia and Cannabis Reforms (11 October 2020)